HERS TO SAVE, PART ONE 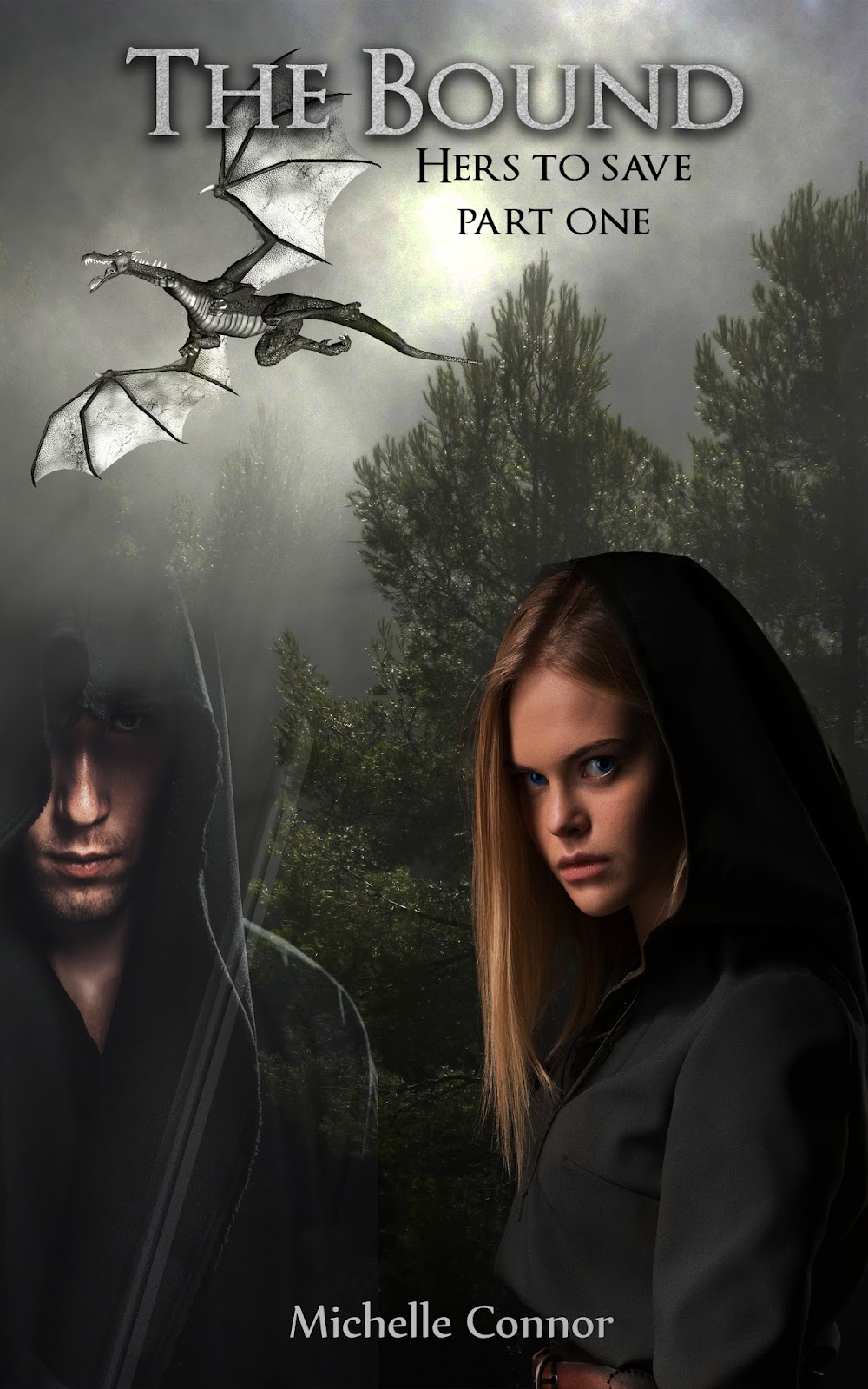 Aveline leads a desolate and isolated life In a small village with her
father and brother. Behind closed doors, she feels imprisoned by the abusive
life she is forced to lead and clings on to the wisps of happier memories
as though they could fly away.

Living in a world where everything slips easily through her fingers, what
will it take for Aveline to spread her own wings and fly?

Can she become strong enough to face what is to come and combat the
darkness sweeping beyond her small, lonely world?

Herveus lives in the shadows, collecting stains on his soul. He has taken
lives to protect someone, leaving him feeling indifferent, but what will
happen to him when he is forced to step into the light?

When Aveline finds herself in trouble a disgruntled Herveus is left with no
choice but to come to her rescue. Little does he know she might just become
his savior. 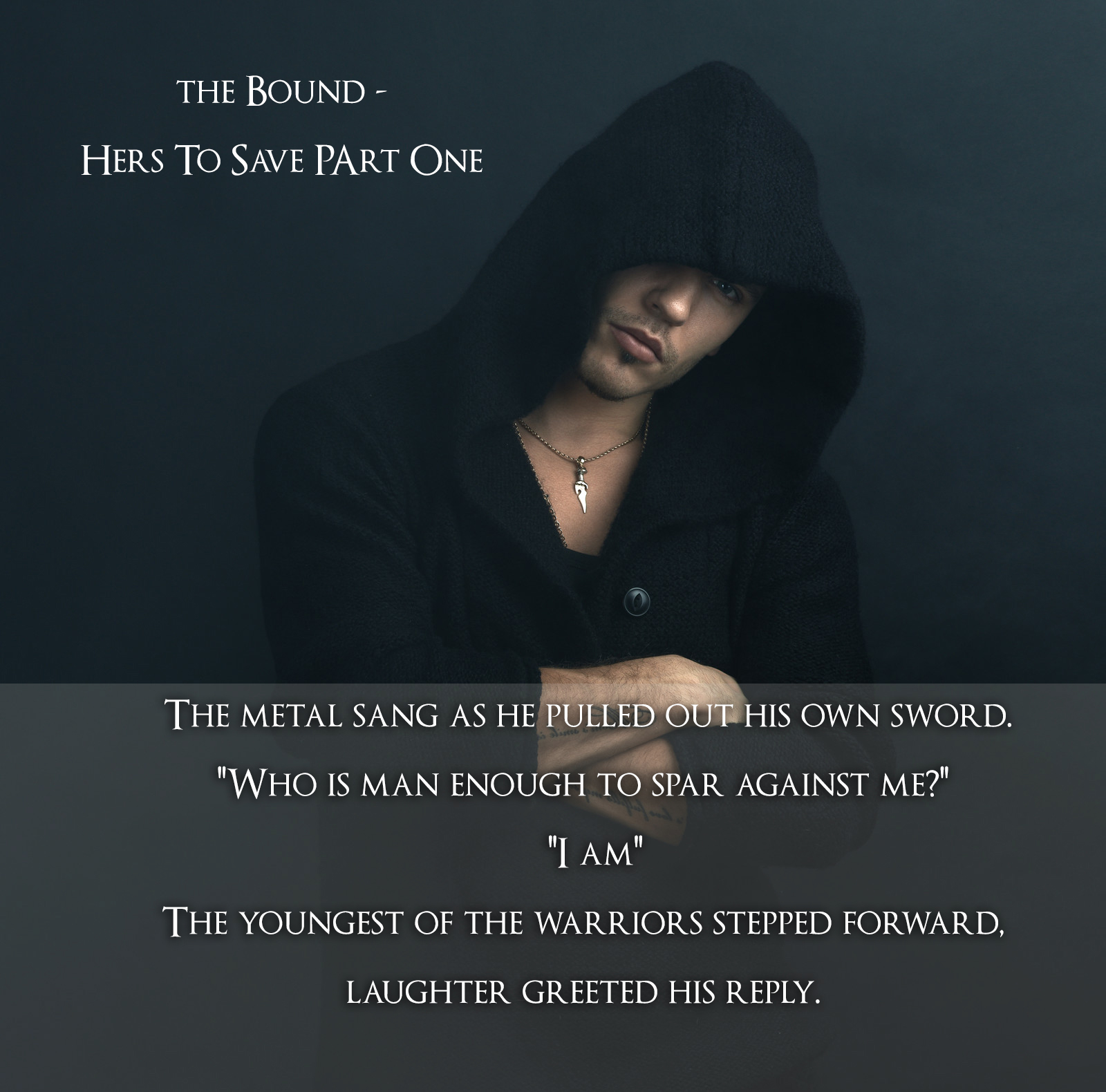 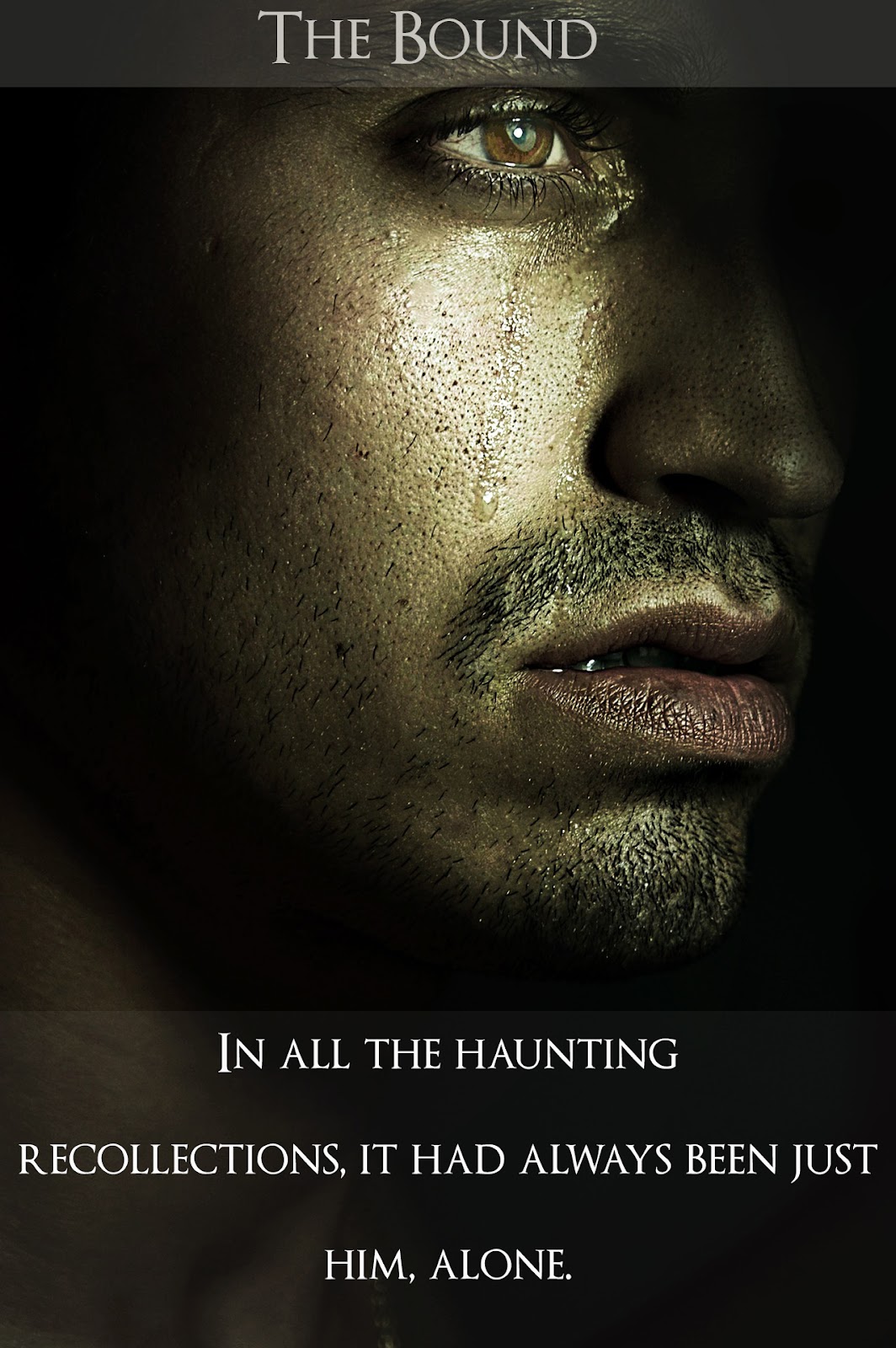 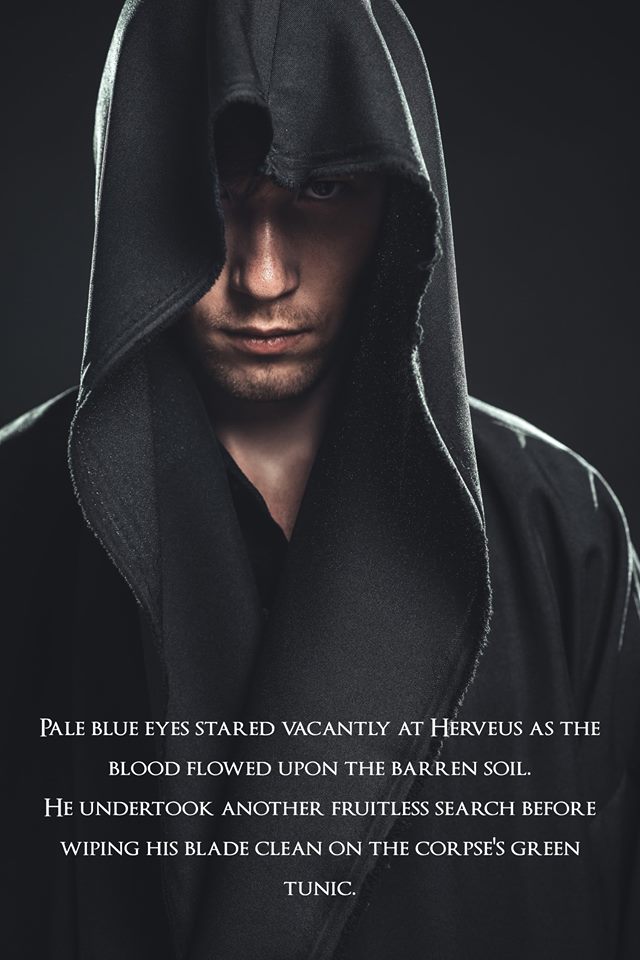 I’m a mother of three and a parent to a cat, dog, and a husband.

As you may have gathered I enjoy writing, but I also love anything
artistic, from painting to photography. I love spending time with my family
and pets walking through the woods or spending hours driving through the
countryside. I enjoy the freedom my artwork gives me, the chance to escape
into a character or into a painting, even a photograph and when I’m not
escaping into my own worlds, I escape into other people’s devouring books
like they’re running out.

What do you think of when you picture elves? Could they be real? What about other fantasy beings? What about… Santa Claus?

Shawn is accustomed to living life the way he wants to. He has no responsibilities, no one to answer to. He comes and goes as he pleases, traveling the world, looking for fulfillment.

But all that is about to change…

Santa’s sick and getting old. This year, he’ll be replaced by his son. Will you be on the naughty list?

An Excerpt from Santa’s Son…

Passions have always ruled my family.

Always. My father’s name is Pelznickel, but he has been called many things throughout the millennia. Saint Nicholas. Kris Kringle. Santa Claus.

Yes. That Santa Claus. The man who’s brought joy to the children of the world for thousands of years. People have thought him a child’s story, a myth.

I spared a glance over my shoulder to ensure the redhead was gone and I was alone. Satisfied, I rubbed my right index finger along the side of my nose. A feeling of pins and needles covered me, as if my entire body had lost circulation. In a way, it had. The warm sandy beach I’d been walking on blurred and swirled in my vision, quickly being replaced by my bedroom.

The first few times I’d ever teleported, I’d been convinced I’d stayed still and the world had moved around me. Now I knew better.

“Master Schonesgeschenk, your father is looking for you.”

Fighting the urge to roll my eyes, I strode to the door. The fat little gnome waiting for me on the other side was dressed in thick green robes with white trim. His long white beard nearly reached his waist. “Astlin, how many times must I ask you to call me Shawn? It’s just Shawn, I swear.”

David loves interacting with people and meeting new friends, so please be sure to follow him on his author page: https://www.facebook.com/AuthorDavidScott

Book: Hammer And The Mist

Series: The Biker and The Valkyrie

Statuesque, blonde and beautiful, Mist is the epitome of Norse perfection. As leader of the Valkyries, she’s been sent to Walhalla, South Carolina by Odin himself…

The Valkyries’ objective is clear: gather the souls of biker warriors for Ragnarok; the war at the end of the world.

Hammer is the president of Odin’s Ravens MC, and as dark as Mist is fair. He’s going to need help from Mist and the Valkyries to keep the Iron Barbarians from taking over the state.

The Valkyries aren’t supposed to get involved, and Mist isn’t supposed to fall in love. Add in the complications from witches, trolls, and some trouble-making nightmare Maras and Odin’s army of souls may soon have reserves.

Buy Hammer and the Mist

The tall, handsome man with silver hair sits contemplating his newly refurbished halls in what could easily be described as his palace, if he so chose, his ravens perched behind him on the back of his sofa. The Armani suit he wears does nothing to disguise his hard, muscled body, a hardness that seems to be emphasized by the leather patch he wears where his left eye once used to be. He stands and begins to pace his room as his thoughts run deeper, his ankle length leather coat swirling round him. Spread out before him is a huge map of Midgard. It shows the many landmasses from which he receives no warriors for Valhalla. He considers how the Æsir are very conscious of their links to Midgard. While Asgard is constantly being updated to reflect the fashions of the Nine Realms, it is Midgard that has prominence. However, he does not have influence over all Midgard, just a very small part. It amuses him that to his knowledge the Midgardians still consider him as a god whose time ended in their ninth century, that the Æsir are considered on Midgard to mirror the Vikings of their past. It makes it easy for him and his fellows to walk the streets of Earth. All the streets of Earth.

He muses to himself. “The mortals have always been aware of us, even if they don’t openly worship us in the ways the Vikings did. Some do not seem to be quite as devoted to the White Christ as they have for the last thousand years. Some even go as far as to state they believe in no gods. Fools…

Still the people influenced by the old Viking world have kept us firmly in their culture. Especially since the period they call Victorian after a great Queen, when they romanticised the Vikings. We are in their museums and their books, in their children’s schools. Men wear Mjolnir round their necks.

I am Odin, chief god of Asgard, worshipped by the Vikings, remembered on Earth at each mention of Wednesday, for I am also known as Woden among the Germanic peoples.

My Valkyries are the collectors of the slain. The valiant dead brought from the field to join my army in Valhalla, the hall of the dead. There they feast all night and fight all day.

I have my Valkyries in place in certain areas of Midgard and everything is proceeding apace there, but I need to augment my forces before the final war and Ragnarok. My Ladies are not all working. There is potential for them to scout for me elsewhere.

When I look further afield I look to the country they call America, to a world my Vikings briefly touched upon. I look at the people there and I can see the interest in Vikings, in everything to do with their culture including us.

Which brings me back to my Valkyries, I am going to send for a flight of them to go down and survey the situation in more detail.

Best I tell Freya at some point, so that she won’t be surprised. She receives half of everything the Valkyries bring to Asgard, and so I need to tell her to expect an increase in her share of the dead.”

“I call my chosen Valkyries to me, I summon Mist as Mist, Kara as Wild, Rota as Storm, Alvitr as Strange, Hlathguthr as Swan, Sigrun as Victory and Skuld as Future.” I use the modern equivalent of their Norse names, if they go to America with their old names they will encounter problems, not least that the humans may have difficulty pronouncing them.

Seven of my Valkyries appear on their cloud horses, dismounting their steeds and falling to one knee.

They are the Valkyries of old in appearance, all but the redhead Strange have blonde hair. The differences come in costume, instead of silver or gold helmets they wear brimmed pale leather hats. Their blood red armour has been replaced with red leather jackets or some other red item of clothing. Little things make so much difference.

“My ladies, it occurs to me that you are not as busy on Midgard as you once were. Therefore I have come up with a plan to make use of your skills in a way that might be beneficial to me. I want you to go to the land called America.

There you will look into the possibility of recruiting warriors for Valhalla.

You will find a place on the continent to set up a compound and furnish it with appropriate animals and buildings so that you can bring potential recruits to stay, to further instruct them in our stories.

You will have all the necessary resources you need for your mission. I foresee that your task will take a number of years.

Mist, you are in charge, but I know you are all capable. Go and make plans.”

They bow their heads as I leave the room, and as I close the door I hear their steeds departing.

Hi – my name is Clare, and although it shocks me, I’m an author…I’m English and consider myself a biker, whether you do or not is up to you. I come from the Midlands, but have moved up North (!) I started to ride bikes in 1980, and have been around bikes and bikers ever since. I’ve loads of interests and hobbies but particularly I ride and drive horses and craft.

On Facebook I can be contacted in a number of ways.